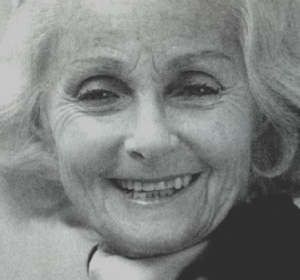 Anyone who knew her will remember her as a petite woman, almost pixie-like with her bobbed white hair, twinkling blue eyes and a Zsa Zsa Gabor accent who was always authentically herself. A trained linguist, she had an elegant way with English that was enlightening and always enlivening. Having studied and worked with researcher and pediatrician, Dr. Emmi Pikler, in Budapest, Hungary, she introduced in the United States the revolutionary concept of respect for the infant as a complete, if immature, human being with a self-initiating agenda to discover the world (and us) with an almost scientific approach.

Through her books, Dear Parent and Your Self-Confident Baby (with Allison Johnson), her articles, lectures and trainings, she has inspired generations of parents and professionals to see infants as active participants in their own development from the very first moment of life. As a teacher Magda gently but firmly helped her students to understand that her perspective on infants, if you could see them the way she did, could change your life, and even your relationships with other adults. Yes, infants are part of their mothers as Winnicott (whom she often quoted) suggested. Yes, they have numerous inborn traits that guide development (as she quoted the maturationists such as Piaget). Yes, they elicit our love, devotion, and fascination because they are so cute and needy. Yet the infant Magda showed us is so much more; she showed us that a baby is a miracle, a whole person, who, with our deeply attentive care, unfolds into a wonder, unique in the world. She taught us to wait, to watch without preconception, to observe with genuine curiosity, to see what the baby was trying to tell us. She gave us new eyes through which to see, not the infant we have in mind, but the actual infant before us, and to respond quietly, gently, slowly to its cues and initiations, and to respond not only to its needs but its competencies as well.

After Magda gave a student new eyes with which to see infants, contraptions like walkers and Exersaucers look like instruments of torture. A tiny infant propped to sit looks uncomfortably forced. Seeing an adult hold an infant up by the arms and walk him around makes us wince, we have to look away. She helped us appreciate that all babies fall down but that infants who are allowed to move freely and get up on their own can fall with the skill of a martial artist.

Perhaps because Magda had so gracefully come through the difficulties of her generation (two world wars, the Hungarian revolution), and was able to see life in the United States with a wider view than most, she offered a counter-cultural view of what babies need. Magda was controversial because she spoke a truth that was and is, so divergent from the typical and often commercialized view of babies that people sometimes felt judged, pained by these ideas. Current brain research is offering new support for her ideas, and students new to them, thirty or more years after she introduced them, are still inspired. Her vision is as timely and important as ever. Magda will live, not only in the memories of those who loved or admired her, but also in the continuing work of her many students who are bringing her vision to life — a world in which all infants are treated with the respect they innately deserve.

This article appeared in the July 2007 issue of The Zero to Three Bulletin. Copyright 2007 Zero to Three. For permission to reprint, go to zerotothree.org.